Acetaminophen is often classified as a non-steroidal anti-inflammatory drug (NSAID), although in clinical practice and in animal models it has little anti-inflammatory activity (1). However, like NSAIDs, acetaminophen inhibits pain and fever and is one of the most popular pain relievers / fever reducers in the world. Despite the long-term use and popularity of acetaminophen, it lacks a clear mechanism of action. Flower and Vane demonstrated that acetaminophen inhibited cyclooxygenase (COX) activity in dog brain homogenates more than in spleen homogenates (2). This gave rise to the concept that there are variants of COX enzymes that are differentially sensitive to this drug and that acetaminophen acts centrally. However, although two isozymes of COX are known, neither isozyme is sensitive to acetaminophen at therapeutic concentrations of the drug in whole cells or homogenates. In contrast, COX-1 and -2 in homogenates frequently exhibit the paradoxical property of being stimulated by sub-millimolar concentrations of acetaminophen and inhibited by super-millimolar levels of the drug (1). This finding suggests that no isozyme is a good candidate for the site of action of acetaminophen.

When analyzing the expression of COX-1 and -2 RNA in dog tissues, our laboratory observed that the cerebral cortex of the dog brain contains two different RNAs that hybridized with a canine COX-1 cDNA. One RNA was ~ 2.6 kb in size and the other was ~ 1.9 kb in size, and analyzes of these RNAs suggest that they encode previously uncharacterized COX-1 related proteins.

RNA isolation and construction of a cDNA library.

Antisense oligonucleotides for the first intron of human and canine COX-1 genes were synthesized and end-labeled using [γ-32P] dATP.

Northern blot analysis of human tissues with an intron probe 1 detected a 5.2 kb mRNA similar in size to one previously reported (5). The marathon-ready human cerebral cortex cDNA (CLONTECH) was amplified by PCR (CLONTECH, PCR Advantage 2 Enzyme System), using 5 'and 3' primers, and an amplified 4.2 kb fragment was recovered and found to contain the entire coding region of human COX-1 with retained intron 1.

Expression of COX-3 and PCOX-1a in Baculovirus.

In some cases, tunicamycin at a final concentration of 10 µg / ml was added to the insect cells 1 hr after infection, and the cells were cultured and harvested after 48 hr. The activity of intact cells was determined by RIA (7). 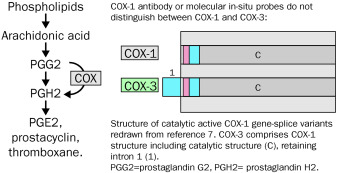