DNA polymerases are a group of enzymes that are used to make copies of DNA templates, which are used essentially in the mechanisms of DNA replication. These enzymes make new copies of DNA from existing templates and also work by repairing synthesized DNA to prevent mutations. DNA polymerase catalyzes the formation of the phosphodiester bond that forms the backbone of DNA molecules. It uses a magnesium ion in catalytic activity to balance the charge of the phosphate group.

DNA polymerases generally have a conserved structure and therefore define their vital role in cellular function that cannot be replaced.

DNA polymerases are made up of subdomains that resemble an open right hand such as the palm, fingers, and thumb.

The palm contains the essential catalytic amino acids in its active sites.

The fingers play an important role in nucleotide recognition and attachment.

The thumb is for the binding of the DNA substrate.

There is a domain found between the finger and the thumb known as the pocket, which is made up of two regions, that is, the insertion site and thepost-insertion site.

Other subdomains along with these domains are specific to each family and each has essential functions in DNA replication.

However, these subdomains are different for each polymerase.

Structure of family A

In addition to the subdomains already discussed, family A polymerase also has a 5 'to 3' exonuclease that is used to remove RNA primers from

Some family A groups also have a 3 ′ to 5 ′ exonuclease activity that works to correct DNA.

Structure of family B

Structure of the  family X

These family groups have the thumb, palm, and finger subdomains that are structurally part of the N-terminus or in the 31 kDA polymerase

The N-terminus is connected to an 8 kDa amino-terminal domain that contains a 5 'deoxyribose phosphate lyase, which is essential in base cleavage

Structure of the Y family

The N-terminus of this group contains the catalytic nucleus of the palm, fingers, and thumb.

They also have a C-terminal that has a conserved tertiary structure of a four-stranded beta sheet supported on one side by two alpha helices, which

are also known as the little finger domain. They play a role in DNA binding and is essential for completing polymerase activity.

However, this family lacks flexibility, unlike the other families.

Basically, the types of DNA polymerase are also divided according to the organism that possesses them, that is, eukaryotic and prokaryotic DNA

polymerases. These types of DNA polymerase are classified based on their characteristics, including structural sequences and functions. 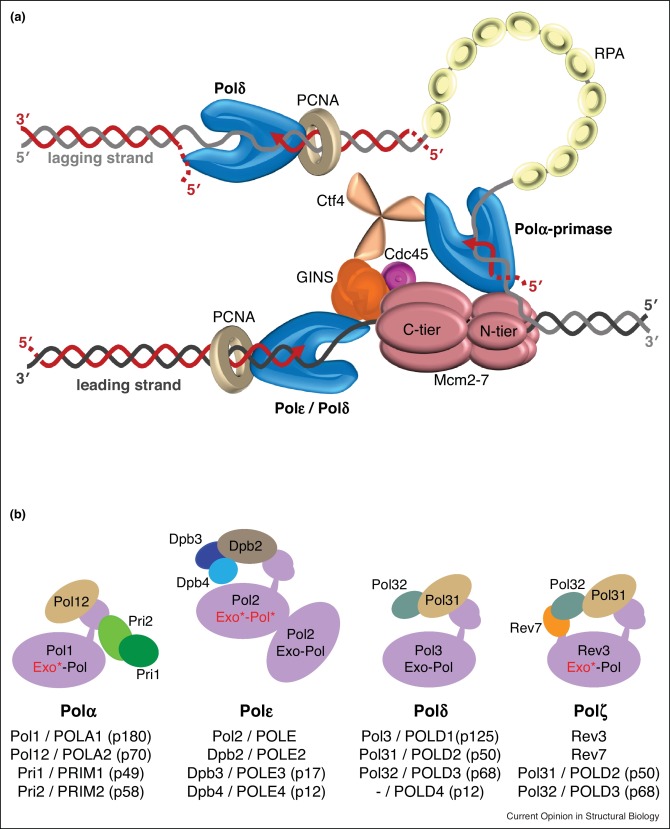