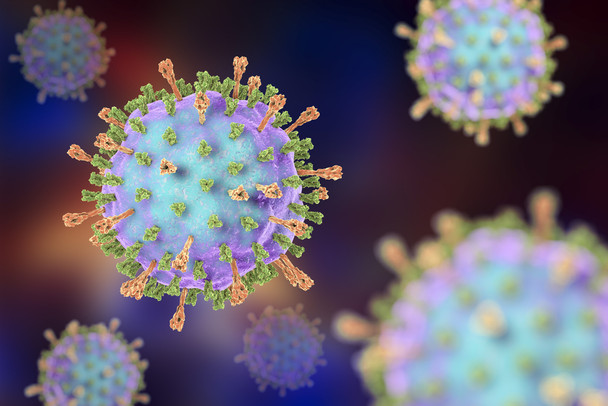 Mumps virus nucleoprotein (strain Jeryl-Lynn) is a recombinant antigen manufactured in mammalian HEK293 cells for immunoassay development and other applications.

The mumps virus is an enveloped, single-stranded, linear negative-sense RNA virus of the genus Rubulavirus and family Paramyxovirus. The Jeryl Lynn strain of mumps virus has a genome size of 15,384 nucleotides and encodes nine proteins (Clarke et al., 2000). Proteins involved in viral replication are the nucleoprotein (NP), phosphoprotein (P), and polymerase protein while the genomic RNA forms the ribonucleocapsid. The MuV NP encapsidates the virus genome, protecting it from nucleases. The nucleocapsid (NC) has a helical structure, approximately 20 nm in diameter, with a hollow central cavity approximately 5 nm in diameter. The encapsidated genomic RNA is termed the NC and serves as template for transcription and replication. During replication, encapsidation by N is coupled to RNA synthesis and all replicative products are resistant to nucleases. Mumps virus replicates by budding from the cell surface and the roughly spherical shaped virus particle, has a size ranging from 1,000 to 8,000 A. Humans are the only natural host for this virus.

Viral nucleocapsid proteins usually elicit a strong long-term humoral immune response in patients and the detection of antibodies specific to mumps virus nucleoprotein plays an important role in immunoassays for mumps diagnosis. The carboxy terminus of NP also varies significantly between mumps virus strains and therefore can be used for differentiating between vaccine and wild-type isolates (Boriskin et al., 1994). MuV Nucleoprotein has been used to stimulate peripheral blood mononuclear cells (PBMCs) from a mumps patient to isolate a MuV-specific CD4 T cell clone. The T cell epitope was mapped to a well-conserved region of the viral protein (de Wit et al., 2019). Nucleoprotein has also been shown to improve the phosphorylation of MuV phosphoprotein (P) by enhancing the activity of PLK1. The PLK1 binding site in MuV P was mapped to residues 146-148 and the phosphorylation site has been identified as residues S292 and S294 (Pickar et al., 2015).